Early this summer The Bachchao Project contacted Localization Lab to propose a localization sprint (with the support of DataMeet and Random Hacks of Kindness India) to address the language accessibility needs of users in India, particularly those of women and marginalized groups. With regular occurrences of online harassment, censorship, surveillance, internet throttling and all out shutdowns regularly occurring in India, The Bachchao Project selected a set of four tools to localize which would provide everyday users and human rights defenders alike with a basic digital security suite:

Often the assumption is that localization into Hindi or English will suffice for users across India. Most users do in fact access tech in Hindi or English, however neither is the first language of the majority of the population. While users are able to generally navigate mobile phones and desktops in a second language, they do not necessarily understand how these technologies work, the privacy and security risks associated with them, and tactics for accessing the open internet. To address this, the India Localization Sprint focused on localization into local languages other than Hindi, however not fully excluding it from the event.

While India and the rest of the world continue to struggle through a global health crisis, there is a need to collaborate, convene and build networks in safe ways. In order to achieve the lofty goals of localizing 4 digital security resources into a number of languages, The Bachchao Project and Localization Lab organized a virtual localization sprint to take place over the course of 2 weekends. The India Localization Sprint was hosted in 7-hour blocks with tool demos, localization discussion and collaboration as well as feedback and Q&A sessions with the developers and creators of the resources.

The sprint was widely advertised throughout November and received a total of 26 signups.

The first weekend of the India Localization Sprint launched on the last weekend of November with localization of the Safe Sisters Digital Safety Guide for Women and Girls and Psiphon for Android. 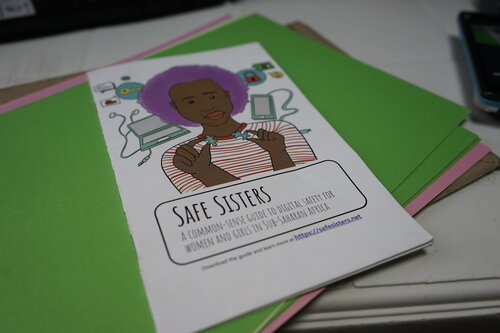 The first day of the event focused on the localization of Safe Sisters into Hindi, Marathi, Malayalam, Kannada, Konkani, Tamil, Manipuri and Assamese with a group of 13 attendees. Safe Sisters was highlighted for localization by The Bachchao Project (a techno-feminist collective serving women and gender minorities) because not only is it a guide developed by women for women, but it is one of the very few guides developed by women in the “Global South” and not form a European or North American perspective. The digital safety guide not only addresses women and girls and their unique digital safety needs, but originally developed for a Ugandan and East African audience, it keeps regional constraints in mind, many of which overlap with those faced by Indian users.

Helen Nyinakiiza from Defend Defenders joined us from Kampala, Uganda to start the sprint with an introduction to Safe Sisters and an overview of the unique approach used to create the guide – engaging a group of about 10 regional collaborators to communally develop the resource. The attendees then read through the full Safe Sisters guide in small groups, keeping an eye out for elements of the guide that would need to be added/removed/changed to make it most relevant for Indian audiences. Once consensus was reached over any changes and the groups had reviewed and solidified translation of key terminology used throughout the guides, participants dove into translating the guides in small groups by language. By the end of the event the Safe Sisters Guide was fully translated into Marathi, and Malayalam, with Hindi, Kannada, Konkani, Tamil, Manipuri and Assamese translations still in progress. 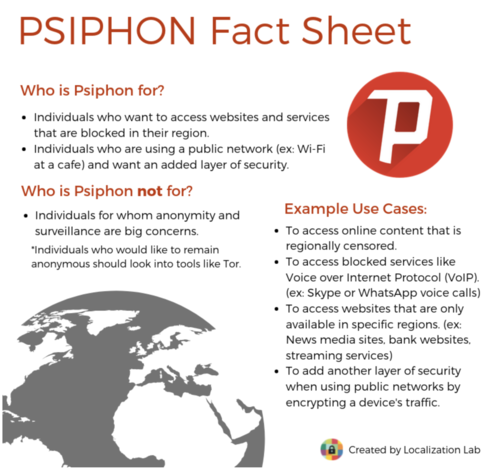 The second day of the sprint focused on localization of Psiphon for Android into Hindi, Marathi, Kannada and Malayalam with a group of 9 attendees. The event began with a presentation and Q&A with Keith McManamen of Psiphon who overviewed Psiphon, how it works and differs from other circumvention tools and most importantly, how Psiphon has been used in India in a period of increasing internet throttling and censorship. Psiphon was selected by The Bachchao Project for localization because a secure circumvention tool that is easy-to-use is essential in today’s India, a country which has had over 450 individual internet shutdown events in addition to long-term regional internet throttling. The Bachchao Project wanted a tool that would be usable and free for users in India, but would also be open source, not log identifying user information, and would actually work in India with differing regional internet connectivity.

After a meaningful presentation and Q&A with Psiphon, the day’s participants spent an hour overviewing a long list of technical terminology used throughout the Psiphon application. Prior to localizing the Psiphon Android app itself, participants worked in small groups – using resources like the Microsoft Terminology, Fuel terminology and Localization Lab Glossaries – to ensure all of the technical terms were understood and had agreed upon translations. By the end of the day, Psiphon for Android had been fully translated into Hindi, Marathi, Kannada and Malayalam.

The second weekend of the India Localization Sprint focused on localization of Tella and Signal, both for Android.

Day one launched with an in-depth live demo of Tella from Raphael Mimoun of the Horizontal team (developers of Tella), sharing how Tella has been useful for defenders around the world. Tella has the capability of securely collecting and storing audio, video and forms for documentation and reporting. Raphael overviewed all of Tella’s features and then fielded questions from participants about how Tella would work in an Indian context. The Bachchao Project chose Tella because it is a useful documentation tool for defenders and journalists alike and participants were particularly pleased to hear about Tella’s icon “camouflage” feature and ability to work offline and with low-bandwidth. Raphael also shared more in-depth information about how form templates can be created using tools like KoBoToolbox in order to deploy surveys with Tella. 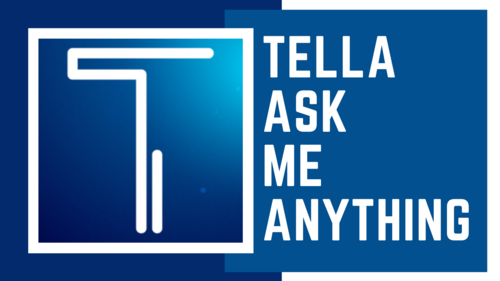 After the demo and Q&A, participants again reviewed the glossary to be sure that relevant technical terms were first understood and translated and then the group of 8 attendees dove into translation of Tella for Android into Hindi, Kannada, Marathi, Malayalam and Tamil. By the end of the event Tella was translated fully into Kannada, Malayalam and Tamil with translations into Marathi and Hindi in progress.

The Last day of the India Localization Sprint was focused on Signal. Signal is a popular secure communication application used all over India and the Signal team has recently focused on translations into Indian Languages. The Bachchao Project wanted to support this effort further by updating and contributing to existing translations. As for other tools, the first goal for the Signal sprint was to review key technical terms and make sure that they were solidified in the glossary. Unlike with other projects which had no prior translations, the participants utilized features in the Transifex (the translation platform) to review existing translations and make sure the glossary was consistent with prior translations and highlight inconsistencies. Overall, 11 translators joined to contribute to Singal Android translations into Hindi, Kannada, Marathi, Malayalam and Tamil and by the end of the day, significant progress had been made updating the Android app across all of the languages with Malayalam and Tamil almost 100% updated.

To end the day and the India Localization Sprint, Riya from Signal Group joined the event to answer questions from the attendees about Signal Groups and other upcoming new features, and – maybe most importantly – Signal’s plans for increasing outreach and adoption of Signal in India.

After four days of collaboration contributors fully translated or made significant progress across all four projects, and we are now looking for volunteers to help us finish the effort. Are you interested in helping translate or review one of the following projects? Contact us!

The Bachchao Project is looking forward to using Safe Sisters to train its partners. As a part of that effort they are looking to share the completed guides in 2021 in open access and set up training calls for its partners. The Safe Sisters guides need some more translations for this to be possible.

If you are an organisation which works with women on grassroots issues. Please contact Chinmayi (The Bachchao Project) if you would like a training.

The Psiphon team will be deploying the translations that are ready in Hindi, Marathi, Malayalam, and Kannada with a forthcoming update of Psiphon Android (date TBA). In the meantime, translators and reviewers can also sideload this version to be able to check the translations in-context, by selecting the relevant language under Options > More Options > Language or by setting their device language accordingly. Language setting instructions can be found here.

Tella will be deploying the translations in four languages – Hindi, Kannada, Malayalam and Marathi – once all strings are translated and reviewed in these four languages.

The translations provided for Signal are automatically included in bi-weekly (sometimes less frequent) builds. There are more strings that need translation in Signal. The Signal team has also created teams for Assamese and Manipuri in Transifex which were previously unavailable for translators.

Note: This blog post has been jointly written and published by The Bachchao Project and Localization Lab